The MSc Architectural Design for the Conservation of Built Heritage course has been an enriching experience, providing me with the necessary knowledge and skills to work with historic buildings in my career. The course combines the in-depth research required to understand a site with the creative aspects of proposing an intervention, sensitive and complimentary to that site. The site for this year's Conservation Design Project was The Lion Chambers, a Grade A-listed historic early concrete building which is currently in the Buildings at Risk register for Scotland. My dissertation, which is currently underway, deals with the conservation of reinforced concrete, with a particular focus on Lion Chambers. This is valuable for the long-term conservation of our twentieth century heritage as well as for extending the life of our existing concrete-built buildings. The most sustainable option is always to keep, conserve and adapt existing buildings, not demolish and re-build something else in its place.

The Conservation of a Historic Ferro-Concrete Building

The Lion Chambers is an innovative 1907 Hennebique Ferro-Concrete construction on the Buildings at Risk register. It is a cast-in situ reinforced concrete frame structure with cast-in situ external infill panels and covered with a cement render. The façades are in such poor condition that a steel mesh, attached with steel strips and Hilti anchors, was installed to protect the public from falling concrete material. The building has been largely unoccupied since 1995, further accelerating decay due to a lack of heating, ventilation and maintenance.

The project requirements were for to develop a conservation strategy and a design for the Lion Chambers and its surroundings, including the required interventions and phasing, to ensure the transmission of the building, its values and significance into its future. To achieve this research into the building’s architectural and construction history was conducted, previous reports and surveys were analysed, concrete decay mechanisms were investigated, and a full 3D model of the Lion Chambers and the neighbouring Georgian building was produced to gain a better understanding of the structure and areas of concern.

My proposal for The Lion Chambers together with the Georgian building includes the Glasgow City Architecture Centre, to tell the story of the lesser-known architects and designers who helped shape the city; and a co-working hub for the creative industry, in-keeping with the spirit of innovation seen in the construction of The Lion Chambers. 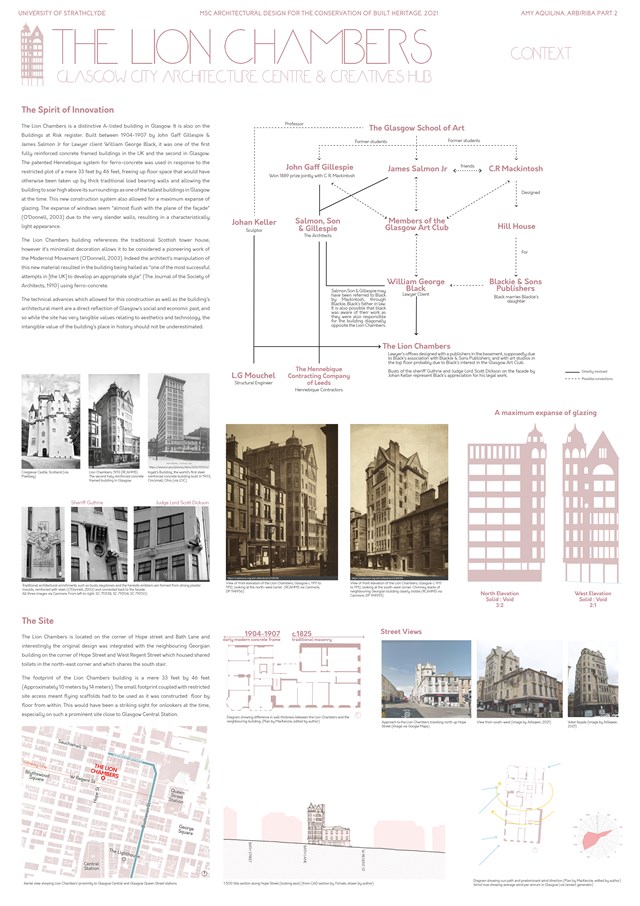 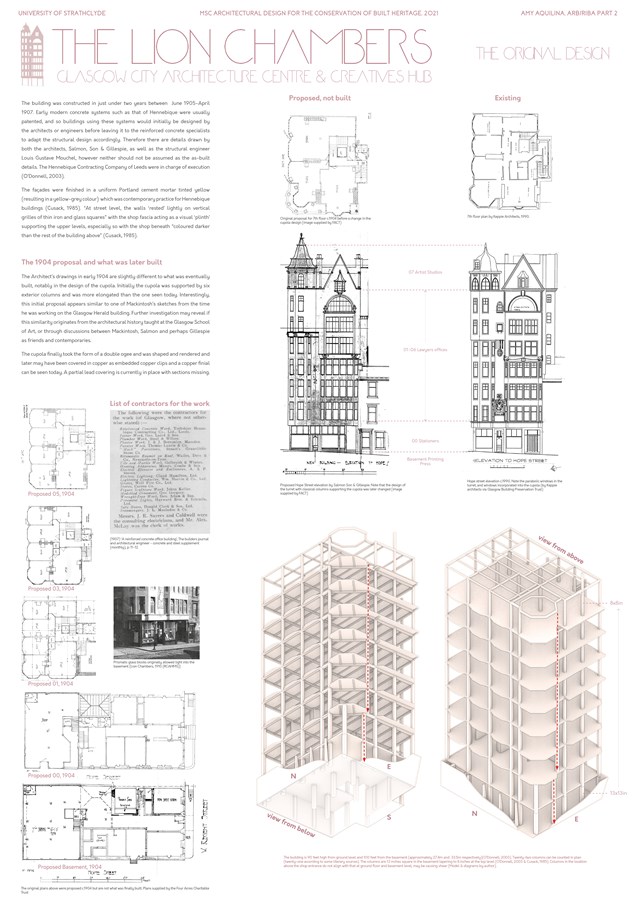 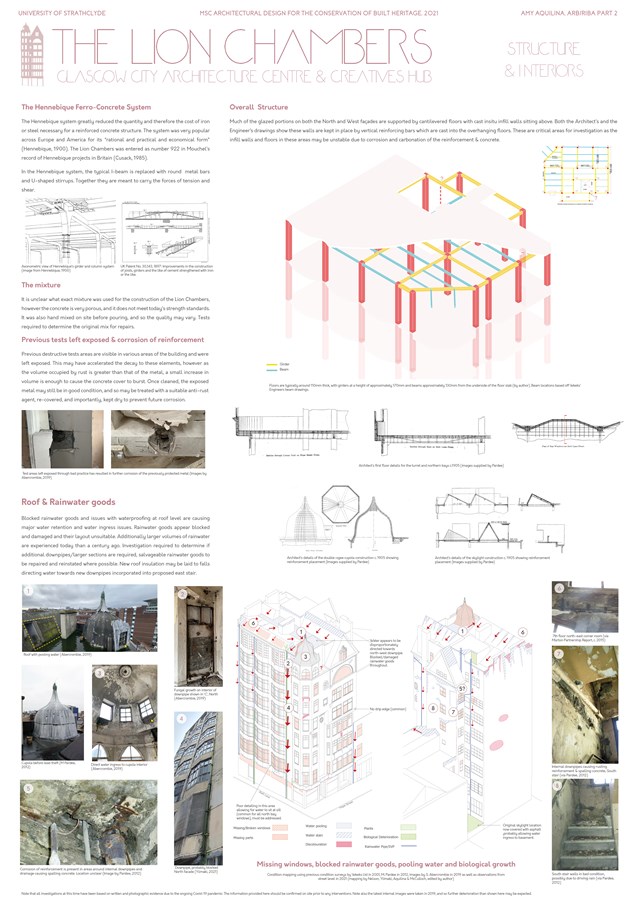 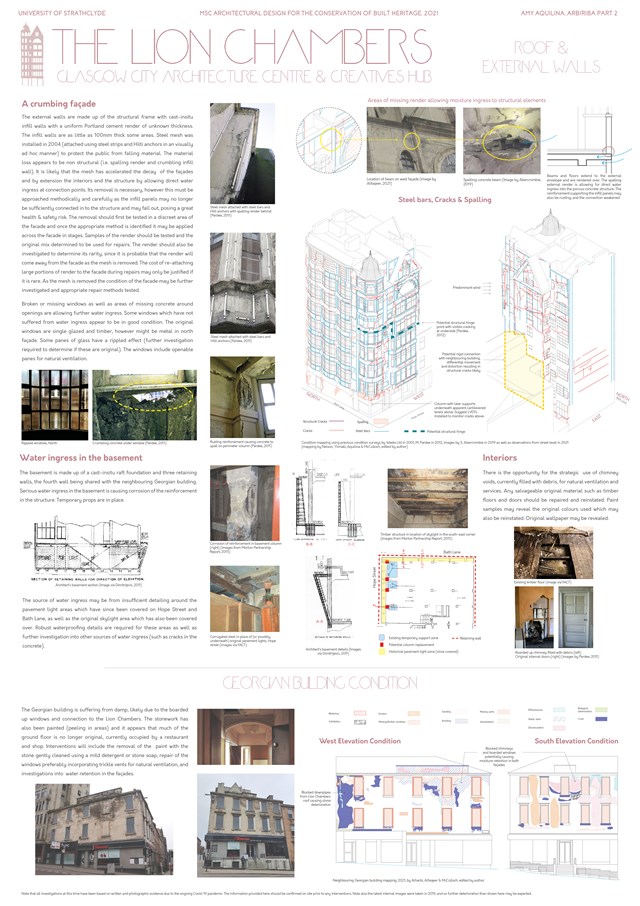 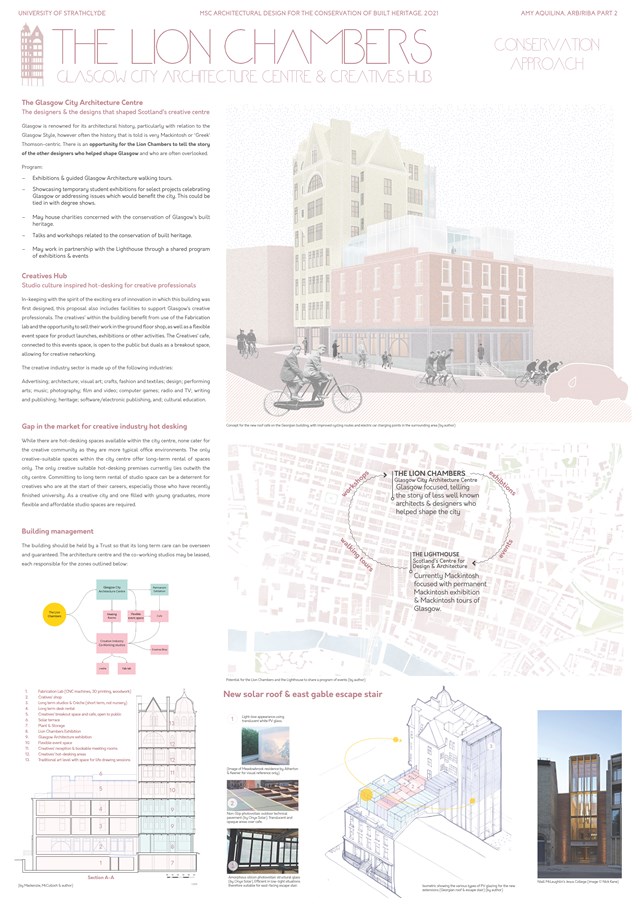 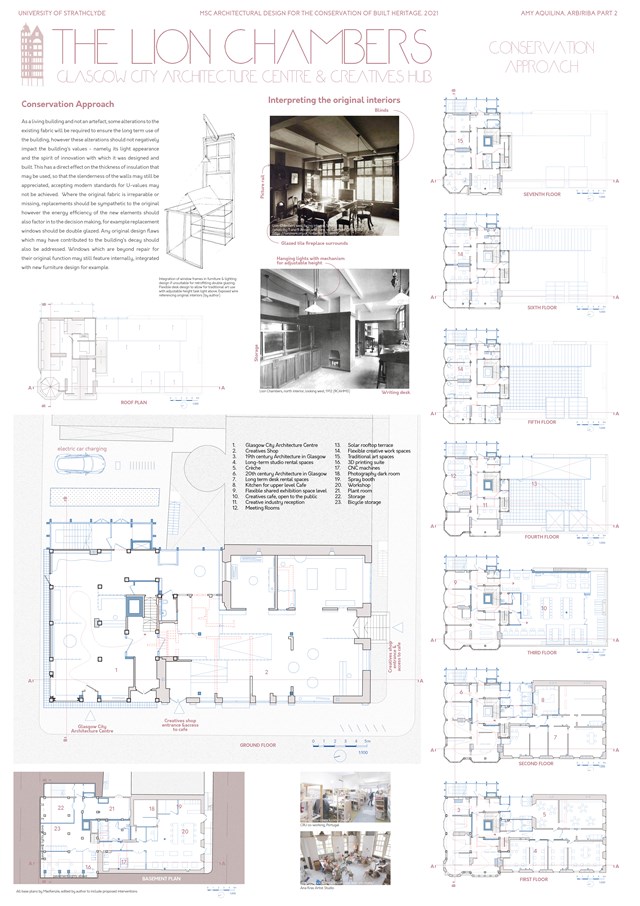 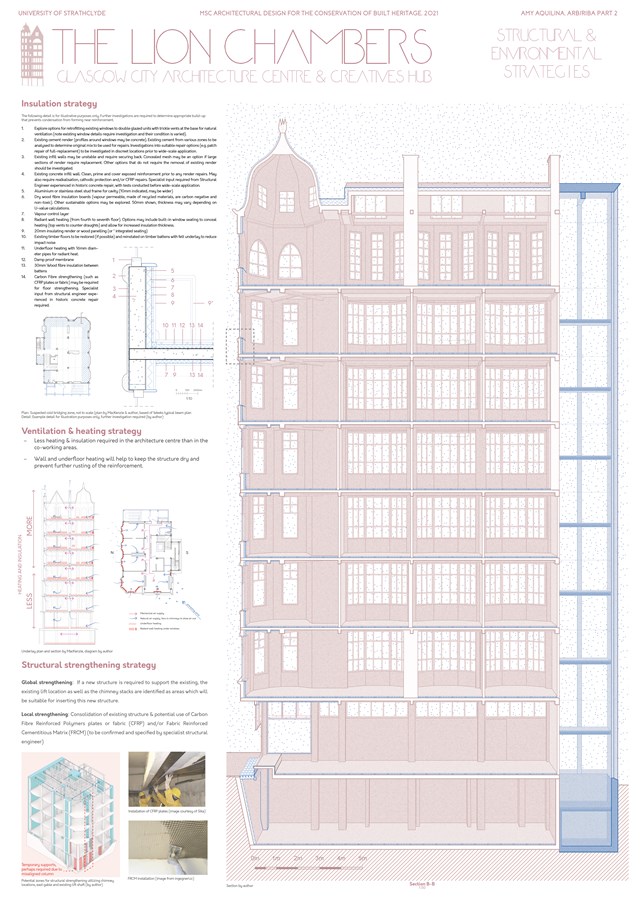 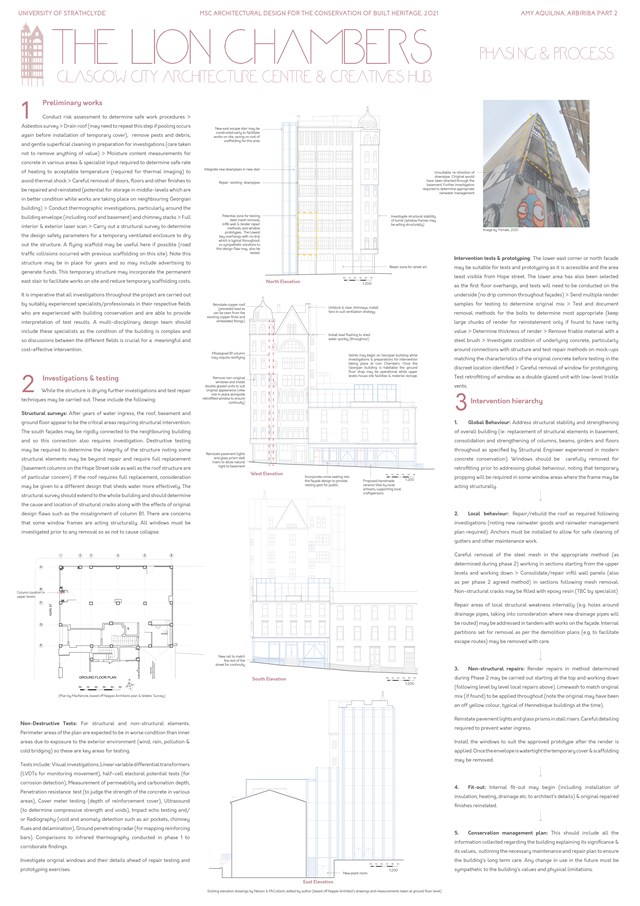 This sample portfolio contains selected works and images from my time at University as well as in practice. As I near the end of my MSc Architectural Design for the Conservation of Built Heritage degree, I am looking for a position as a Part 2 Architectural Assistant where I can support a practice working in the field of conservation. 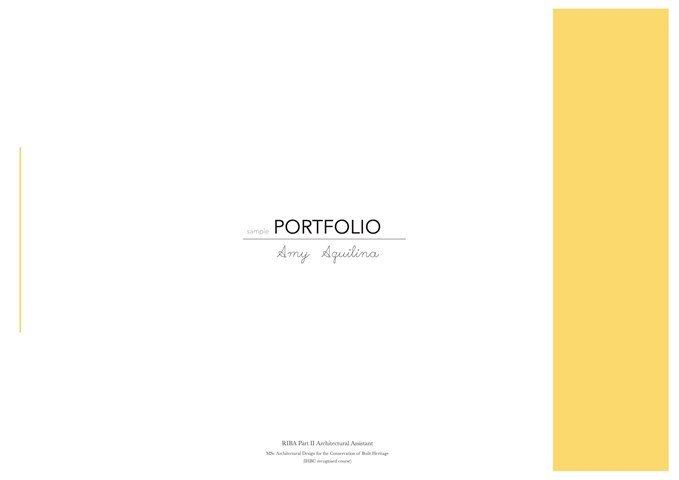 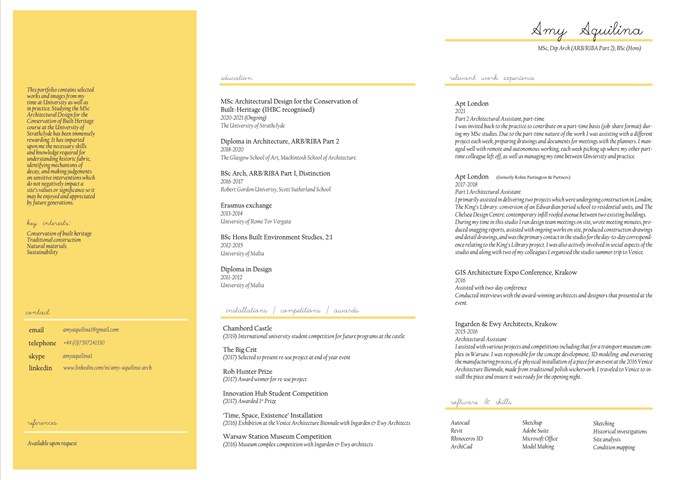 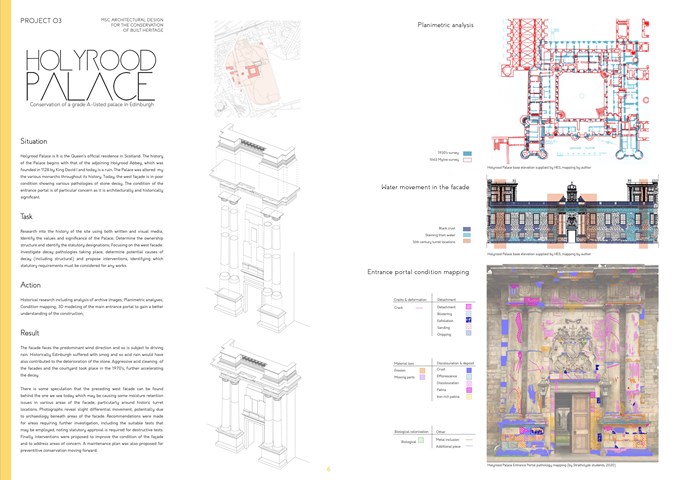