Architectural scholar, Peter Reed describes “Glasgow as a city of disjunctions rather than conjunctions“ with an urban ethos of demolish and rebuild, Glasgow has seen the rise and fall of tenement slums, Corbusian style high rises and arguably our societal sense of community. The once grand solution to urban living quickly became overcrowded squalor during the peak of Glasgow’s 19thcentury population boom. The disappearing Glasgow effect saw the failed attempt to file the working class away in monolithic cabinets, ultimately leading to broken communities and class segregation. Today local authorities and neighborhoods are at risk of a new epidemic of social divide through the process of gentrification. First outlined in 1964 by the sociological pioneer Ruth Glass, who described the effects of gentrification as “One by one, many of the working-class quarters  have been invaded by middle class, upper and lower…. Once the process of gentrification’ starts in a district, it goes on rapidly  until all or most of working-class occupiers are displaced and the whole social character of the district has changed." Areas such as Dennistoun, Finnieston and Govan have notably undergone this change in an effort of so called ‘Urban renewal.’ The tenement is ingrained in Glaswegian DNA, but in a post de-industrialised, Thatcherite era how have the effects of gentrification played a role in the rise and demise of local communities? Glass outlined the effects of gentrification in a three-stage model:

The first stage of a gentrified area may start with the unexpected tenement slum located by the river Clyde. Derelict and disowned, the tenement is an ideal project for a small group of so called ‘risk oblivious people’. This group usually consist of artists and designers which have the skill set to renovate and undertake such extensive rehabilitation. This stage involves very little displacement of the working class as the regeneration undertaken usually takes place in vacant residencies. The sculptor Grayson Perry once described artists as "the shock troops of gentrification" -trailblazers whose taste choices paved the way for property speculation.

The second stage involves much more of the same gentrifies moving into the area, only a small minority will look at renovating houses for profit, larger developers would rarely get involved at this stage as land value is still very scarce, however media attention starts to spotlight the neighborhood with examples of Finneiston reportedly "Britain's hippest street" by the UK Sunday Times and Denniston labeled as one of the worlds coolest neighborhoods by Time-Out magazine.

The Third stage is argued to play the largest part in the regeneration process, large scale developers come into the ‘Urban Renewal’ equation, this is the tipping point where rent prices start to sore, the area adopts a new middle-class ideology, argued to prompt the process of social cleansing. Although the urban fabric has undoubtably been improved, who are the improvements for? The downfall of gentrification could be said to happen at this stage due to the mass displacement of the lower classes, both the aboriginal community and the creatives are pushed out due to rising rent. However, the American urban planner Andres Duany describes gentrification as “usually good news, for there is nothing unhealthier in a city than a monoculture of poverty” the introduction of the middle class is argued to improve local facilities and if done successfully through integration, can allow the whole community to thrive.

Gentrification plays a present role within the city's development, from the new mixed tenure housing in Govan to the super gentrified Riverside apartments. People make Glasgow, but there are 598,830 of us, so the question is who do we invite within the city's walls? My triptych art piece will use the tenement as the urban bedrock of the city and look at how the typology has changed as a result of gentrification both temporally and through the three stage of Ruth Glass’ model. 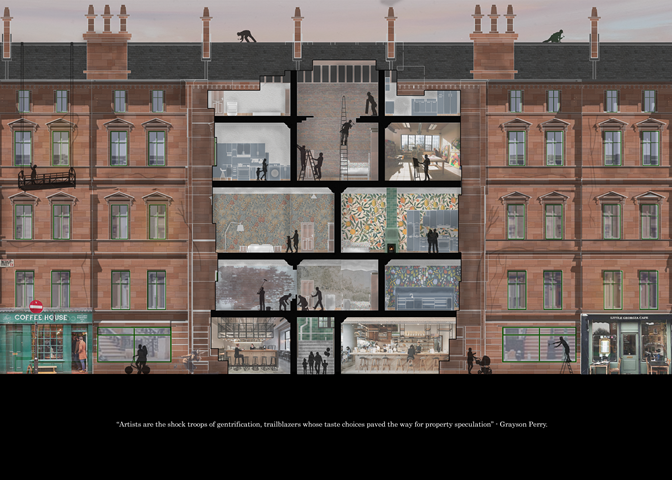 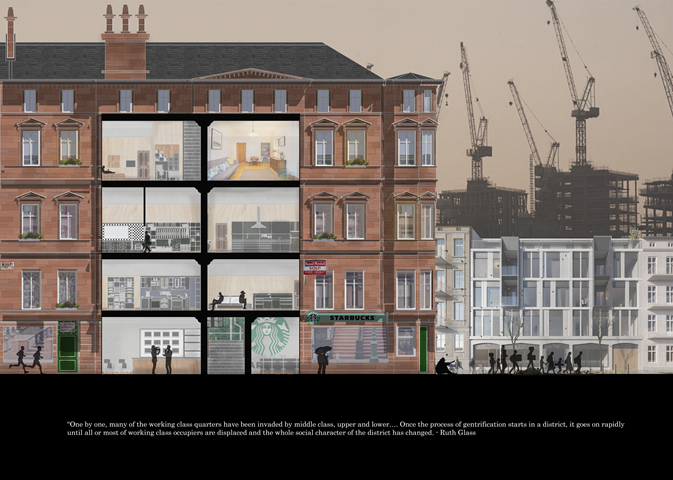 ‘Inequality Street’ is the collective name of the triptych. It looks at how the tenement has changed over time and through the process of gentrification. Each piece may be viewed as an individual or as a collective street. I created the elevations and sections on CAD and used photoshop to bring them to life. Photo montaging was also incorporated to provide the backdrop for the tenements. Each piece is supplemented with a quote on the issues of gentrification. The triptych invites you to explore the buildings and its inhabitants with hidden messages embedded throughout. You can see the change of ground floor commerce, from locally owned ‘Star Bucks’ Butchers to the mass corporate ‘Starbucks’ Coffee chain. The single-End cramped slum has been broken down into the more spacious (arguably less sociable) open plan layout. From green painted frames to white, chunky UPVC windows. From the Highrise housing ‘solution’ to large scale developers forcing out the aboriginal community due to rising rent. The triptych is full of stories, lives, habits and ultimately, the habitat that surround them.